Today's Top Stories
1
Get Our New Holiday Magazine Right Now!
2
12 Best Non-Alcoholic Wines For Every Occasion
3
Are Truffles The World's Most Overrated Food?
4
Got An Air Fryer For Christmas? 43 Things To Make
5
This Flourless Chocolate Cake Is INSANELY Fudgy 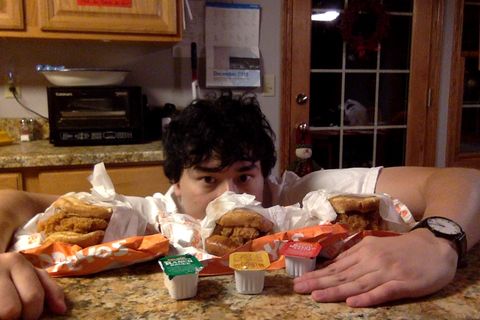 Is the rate at which folks are gobbling the sandwiches concerning? Conventional wisdom on fast food says yes. But the Popeyes chicken sandwich does have some redeeming qualities: It’s priced at the exceedingly affordable $3.99 and, by common assent, is quite delicious.

I decided to join the ravenous legions and become the most dedicated Popeyes chicken sandwich eater in America for one week. I would eat the chicken sandwich for every meal. Nothing else—just water and chicken sandwiches. I wanted to see the compounded effects of the sandwich on my body: how my energy, mood, and weight would be affected. Two sandwiches per day is less than $8; if they didn’t make me wither like a salted snail, I would actually gain respect for the sandwich’s price to sustenance ratio.

It turns out that a week of only eating Popeyes chicken sandwiches did, in fact, make me wither like a salted snail. Despair took over me; ache ate my bones. But that’s not the whole story—I discovered creative ways to eat the sandwich, learned about how to keep my mind clear on a fast food diet, and even ended up shedding a few stubborn pounds.

Like the greens I banished from my diet, “lettuce go.”

I am, especially recently, a healthy individual. This year, I lost more than 15 pounds and began firming my upper body into something other than a gelatinous blob. I’ve accomplished that in part by practicing intermittent fasting—which means I only eat from 12 p.m. to 8 p.m.—and working out twice a day, an intense brief workout in the morning and a longer one in the afternoon. I planned to keep this schedule on my “chicken sandwich diet.”

I didn’t eat my first chicken sandwich until Monday at noon. I was visiting the Akron, OH, jail (don’t ask), and found the nearest Popeyes afterwards. The iconically orange restaurant rose from the drab landscape like a lava geyser. There were about seven people in line in front of me, each of whom ordered between one-to-seven chicken sandwiches. I ordered two: one spicy and one regular.

The first spicy sandwich was decent enough, but I struggled mightily to finish the second regular one. The deep-fried fillet and its crunchy trichomes of fat began to overwhelm any tang or buffer the pickles or bun provided. Each sandwich is 690 calories, which meant I consumed around 1,400 empty calories...in around five minutes.

Afterward, I sat in my car groaning. Drained of energy, it took me a good 20 minutes to collect myself and drive back home to Cleveland. I went to the boxing gym a few hours later and put in a good 12 rounds of work. My head cleared with every punch—it felt like a baby wipe across my brain.

There is a Popeyes down the street from my gym, so I picked one up on the way home. I heard a kerfuffle behind the cashier. “That’s the last one,” someone yelled behind her. “I got the last one?” I asked. “You did,” she smiled. “Have a good night, babe.”

I woke up Tuesday feeling deflated. Yesterday’s three chicken sandwiches had sunk into me and anchored my mood to a bleak, landless expanse. Reluctantly, I got up, did an ab workout, and jumped into a cold shower. I felt better afterwards. I had to get my neurotransmitter kicks somehow, after all.

Later that day, I spoke to Cynthia Thurlow, a certified nutrition specialist with over 20 years of experience, over the phone. I told her how I felt that morning: “If your body is working really hard to digest these inflammatory foods like the Popeyes sandwich, you would probably have some level of brain fog,” she affirmed. “When our insulin levels are that high, our cognitive abilities are going to be down.”

I asked Thurlow what, given my restrictions, I could do to remain mentally clear. She recommended exercise and staying faithful to intermittent fasting. “Strength training makes our muscles and cells more receptive to insulin…when you’re in a fasted state, you’ll have a lot of mental clarity.” She also said that if I waited to eat anything until dinner, any workout I did beforehand would burn fat. That way, I could have my chicken sandwich and eat it, too.

In an effort to preserve my productivity (and sanity), I fasted all day, then worked out at the boxing gym, then headed to Popeyes. It was peak dinner hour and it was crazy. The crowd inside was hectic and demanding.

Standing in line, my post-workout body craved nutrients. I had a genius idea. I deconstructed the sandwich in my head: bun, fried chicken, pickles…pickles! Pickles…vegetable! Vegetable...healthy! “Extra pickles,” I ordered. The exact words I used were “the most pickles you’ve ever put on a sandwich, please.”

The teenage cashier server handed my bag to me with a wry smile. “Extra pickles,” he repeated. I opened my sandwiches in the car. No fewer than 12 green pickles—which are thick-cut to distinguish them from competitors’—smiled up at me. Beautiful.

I went home and ate the sandwich. It turns out there is no such thing as too many pickles on a Popeyes chicken sandwich. Buoyed by the “vegetables,” I actually felt a lot better than the day before. I managed to stave off my remaining hunger for the night and went to bed only having eaten one sandwich.

I woke up on Wednesday absolutely famished. I had only eaten 690 calories the day before but burned more than 3,000 probably. My animal brain took over. I immediately drove to the nearest Popeyes, bought two chicken sandwiches, and wolfed them down right there.

Some other fun Popeyes chicken sandwich facts that might be helpful right about now: Each sandwich has 1,450 milligrams of sodium and 42 grams of saturated fat. That’s over two-thirds of the recommended daily sodium and fat intake packed in one sandwich.

Given my conditions, the only way I could ameliorate the excess sodium consumption was to drink—nay, chug—water. So I drank about four glasses of water. I fell asleep shortly after.

When I woke up, I went to the gym and swam a mile. Exercise helped reset my brain, but after an hour of flailing in the water, I was craving some calories. You know what comes next, right? I went to Popeyes. I ordered one spicy chicken sandwich. “So…is like 90 percent of the orders chicken sandwiches now?” I asked “Mmm,” my cashier said. “I would say it’s a little more than that.”

At home, I decided to eat the sandwich “Trump-style.” President Trump has been known to remove the buns from his McDonald's burgers and claim it’s then a “healthy” meal. I took off the bun to eliminate the carbs, cut the chicken into pieces, opened some sauces I had grabbed, and had myself some “chicken tenders.” I felt marginally healthier afterwards, which is to say that I still felt like shit.

How does it feel to want to flee from that which gives you life? As I drove to Popeyes midday Thursday, signs for other glorious foods taunted me. Empanadas. Pho. Spaghetti. Even the fulsome rack of neglected chicken thighs behind the Popeyes counter giggled at me as I ordered three (!) chicken sandwiches. At the same time, I collected a few different sauces and stashed them in my bag.

Later that afternoon, I unwrapped a regular chicken sandwich and drizzled it with buffalo and buttermilk ranch sauce to create a buffalo chicken sandwich. Amazing! That night, I topped my spicy chicken sandwich with some Sweet Carolina Mustard. Also amazing! I felt momentarily sated. In fact, I realized I had been craving flavor as much as a dose of nutrients.

Still, four days-worth of chicken sandwiches had caught up to me. It felt like the onset of a fever: ache in my bones, a sense of dread, irritability and exhaustion. I swear I could feel my blood pounding against my veins. I went to bed glowering.

Friday was the last day of my diet. I woke up groggy—intermittent fasting and working out had no place in this reality—only to throw the third chicken sandwich from yesterday in the microwave and eat it as it was.

I went to the bathroom and weighed myself. I was 179 pounds: a 4-pound weight loss since Monday. A pleasant surprise, though not entirely unexpected given the week’s calorie consumption. My other health indicators were not so good. I ran my hands through my hair and strands fell out like sailors abandoning ship. I looked in the mirror: My face had taken on a concerning pallor. I touched my cheeks...was that a little bit of Popeyes orange in them?

You know what? I said "Screw it." I was done with this nonsense. I drove to the nearest supermarket to load up the biggest salad I could and I devoured it in the car. Curiously enough, on the way back, my animal brain took over and I visited a nearby Popeyes. I asked my animal brain what it was doing and it responded by ordering all the things I had coveted throughout the week: a large cajun fries, a loaded spicy chicken wrap, and a sweet pumpkin cheesecake. Every single thing tasted delicious. I went home and fell fast asleep.

There was, however, one benefit to the whole experiment. Even a few days after I had restored my body to regular eating habits, I clocked in at a solid 180 pounds, in what seemed to be a sustainable 3-pound loss.

That being said, I would never recommend this diet to anyone else. I’m sure someone out there in America is eating a similar quantity of chicken sandwiches per week, but most nutritionists I spoke to said a Popeyes chicken sandwich once or twice a month was the max they could possibly recommend. I will probably never eat one again.

This content is created and maintained by a third party, and imported onto this page to help users provide their email addresses. You may be able to find more information about this and similar content at piano.io
Advertisement - Continue Reading Below
More From Food Trends
The Ultimate Super Bowl Drinking Game
22 Heart-Shaped Foods To Get On Valentine's Day
Advertisement - Continue Reading Below
20 Keto-Friendly Drinks You Can Order At Starbucks

Every Classic Donut From Dunkin', Ranked
The Only Instant Pot Cookbooks You Need—Seriously
Should I Bring My Parents Wine At The Holidays?
Are Truffles The World's Most Overrated Food?
The Best Keto Meal Delivery Services
The 12 Most Anticipated Cookbooks Of 2022
9 Starbucks Drinks If You Want A Healthier Option